St George the Martyr Dean Prior was first recorded by the Bishop in 1186 as part of the possession of the Priory of Plympton. The first known priest, Gervase of Crediton, was ordained in 1261. Of his church, however, only the West Tower and font remain. The present building was largely rebuilt in C.15th on the site of the earlier Norman Church.

The early West Tower has a central polygonal stair-turret on the south side, with bell openings and an embattled parapet. The red sandstone Norman font is intricately carved with frieze crosses, Saltire and two elongated dragons. The font cover, much restored, dates from C.17th. During the seventeenth century, the Vicar of Dean Prior was the poet Robert Herrick. In those days the parish population was about 400 people. Now the population is approximately 160. Robert Herrick composed the epitaph to Sir Edward Giles and his wife, which adorns the interesting memorial in the south aisle of the church. 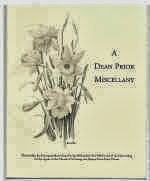 A Dean Prior Miscellany with local historical information and pictures has been published to raise money for the Church Repair Fund 2000.

Copies of the Miscellany can be purchased at the Church at £2.50 GBP each. 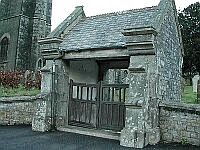 The great yew tree in the churchyard was planted in 1780. The lytch gate was built last century and replaced the church house and almshouses. The village surrounding the church, once included a school, and many cottages, these were all pulled down to build the new road through.

Church Records: Parish Registers going back to 1557 are now held by Exeter Record Office. Please make your own arrangements to view these directly with the Record Office.

1930 The Church of St. George the Martyr, Dean Prior Choir,: 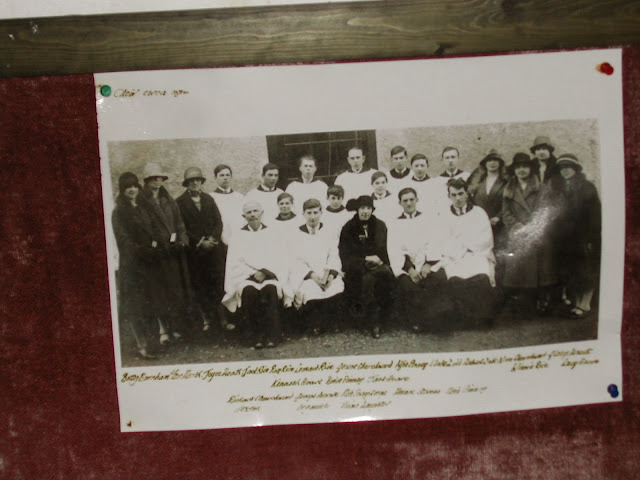 
FORMER MINISTERS OF DEAN PRIOR CHURCH

Rev. John Rowland 1947-2011
We were all stunned and saddened by the sudden death of our vicar, Reverend John Rowland in October 2011.
His work touched so many lives. He was a "people person" and loved to be out and about in the town mixing with groups, visiting homes and welcoming people into the church. Who will forget his individual style of driving, his unique take on dancing (some residents still bear the scars) and his passion for Plymouth Argyle?

He had no time for pomposity, and so was able to relate to people from all walks of life and of all ages, and his caring was genuine, springing from his love for his saviour Jesus. He loved contact with children and families, visiting the school, was on the committee of "The Bungalow", and enjoyed beach cricket on church outings, but he was equally happy at the Senior Citizens lunch club and leading services at Redmount Nursing Home.
What underpinned John's work was his rock-solid faith, which arose from his knowledge of Jesus Christ as his Lord and Saviour. He had discovered Jesus for himself through the Billy Graham Crusades. He then worked in the London City Mission for 13 years as an evangelist attached to Anglican churches in West London, and later as a vicar in inner-city Liverpool. On his arrival here in Buckfastleigh he guided the church through the painful decisions of rebuilding after the fire at Holy Trinity. Although John left school without formal qualifications he worked hard to train as a minister and his delight was to teach others from the Bible to know and discover the love of Jesus. What we have lost is a very wise and brave man.
Our prayers are with his widow, Penny and his two sons at this sad time. 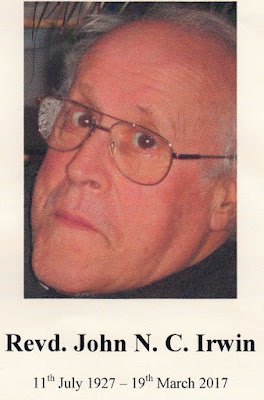 Our former curate, Rev. John Irwin, was another inspiration and a lovely man, who died on 19th March 2017 after a long illness. Our prayers and thoughts go with his surviving son and daughter and their families.

John had been an Oxford graduate, bus driver, psychiatric nurse, ordained priest, devoted husband and father, benefactor of the church.

John served loyally under Revd Paul Wilson and Revd John Rowland. John was not afraid to swim against the popular flow. He was his own man and an independent thinker. John did not need to use the Prayer Book when he led Holy Communion. He knew and could recite it by heart.

We, at St George the Martyr, were very privileged to have benefitted from his ministry.
"When you meet a man who is unusual, take a close look; there is much to learn from him and he has much to teach. John Irwin was such a man." Helen Whyman